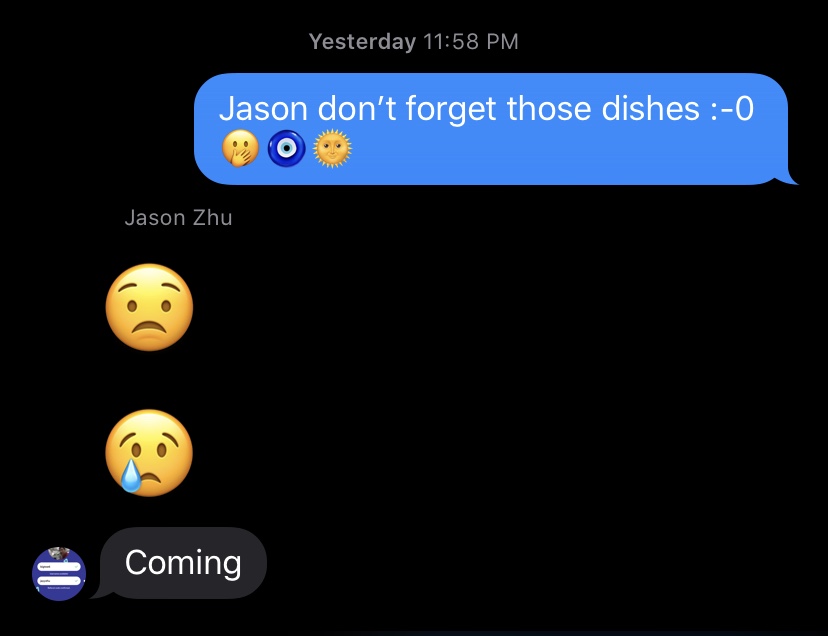 Our goal was to encourage healthier eating habits such as eating meals at regular intervals and reducing mindless, unhealthy snacking. As teammates who all live in the same house, we had the ability to develop a blend of interventions that combined in-person with social-distancing aspects. Ultimately, each of these interventions could be translated in a format able to conform to social distancing rules, with slight adjustments. Just like with food preferences, each of us have very different eating habits and schedules — some of us having the first full meal at 9pm, others eating their body weight in sugar, and yet others eating double their body weight in fat. In order to have the most impact and best target everyone’s particular negative eating habits, we created different interventions that would speak more to our individual issues. With that in mind, we also created a system that would keep one another responsible, by assigning each other to be the ones responsible for making sure the other stayed on top of their particular intervention. We believe this would be the best style of intervention that would keep one another accountable for each other, in ways that integrated more so with our individualized schedules.

To get a better sense of our dietary habits, we logged our food intake, emotional state, and lifestyle for three days. We all realized that our eating habits were worse than we had expected. For Vicky, she realized that her daily added sugar intake was much higher than expected. Despite her normal diet of eating mostly whole, unprocessed foods, she was taking in sugar from unexpected sources such as vitamins, granola, and more. For Miranda, logging her meals helped her realize the extent of her erratic eating habits. On some days she would eat one meal the whole day with no snacks. On other days, she would eat two meals in addition to a ton of snacks. As for Jason, he found that when he doesn’t have time or ingredients to make meals, he would opt for quick, cheap, and unhealthy delivery food. On busy days, his diet would be especially erratic and inconsistent. When he snacked, he would polish off full bags of chips and pints of ice cream, consuming snacks in replacement for meals. For Mimi, she realized that she gets strong sugar cravings that she can’t control, which pushes her to eat something sweet to fulfill that craving. She also finds herself more prone to snacking when she’s not working – she’s always mindlessly munching on something while she procrastinates on social media or Netflix.

Based on an analysis of and discussion about our findings, we determined that our unique goals required unique interventions. For Vicky, this meant having her be more cognizant of mindless snacking on nuts and chocolate. In order to get snacks, she would write a letter to us explaining why she deserved to get a snack—Jason and Miranda would keep the chocolates and Mimi would keep the nuts. For Mimi, this meant “shaming/encouraging” her to reduce her sugar intake. We had her tape up 50 bags of cookies on the dining room wall. Under each bag was a post-it-note that helped Mimi visualize the effect the cookies would have on her. Finally, for Jason and Miranda this manifested in eating more regular, complete meals. We asked Jason and Miranda to eat three meals a day at normal intervals— 8-11am breakfast 12-2pm lunch, and 6-8pm dinner. Failure to abide by those guidelines would result in having to wash Vicky’s dishes/pans used from her meal during that same interval.

For everyone, the interventions worked to a mild extent. For Vicky, the tendency to pull away from nuts and chocolate evidently decreased, but she doesn’t attribute this decrease entirely to the intervention. On the contrary, she found her self eating and not eating out of spite to Miranda. Because everyone in the group was almost always physically present in the house whenever she was hit with cravings, morning and night, Vicky would sometimes rationalize her decisions based on pissing off others. Perhaps the letters helped her at least portion her cravings since each letter could be received by a small handful of nuts or chocolate. Miranda also made it very known how nuts were present in every other food Vicky ate on a daily basis from granola to almond butter.

Mimi found a radical shift in her eating habits, but these changes often came in cycles and were not entirely due to the intervention we put in place for her. She realized that her increased intake of processed sugars could only be countered with whole foods. She preferred fresh fruit over cookies but the supply of fresh fruit and groceries came and went quickly. It was during these moments of in-between when groceries took several days to replenish that Mimi would succumb to her wall of cookies. In her defense, her Birthday week was particularly sugary because her friends (us) decided to shower her with 3 cakes in one day.

Jason and Miranda, the pair who share their groceries and thereby, many of their meals together, found positive changes in their eating habits throughout the intervention. Perhaps, it was Jason’s fear of washing Vicky’s dishes, but meals were eaten more regularly than ever. In retrospect, Jason and Miranda lament that if their first meal is eaten at a decent time, the subsequent meals are too by a chain reaction. For Jason in particular, Vicky’s set intervals for mealtimes were a great reminder to eat and helped develop a cycle for buying groceries so food would rarely run out. Altogether, both Miranda and Jason found their daily food intakes to comprise less of snacks and more freshly cooked foods, for the better.

Generally, we all agreed that having each of our interventions speak to our particular eating habits and lifestyles yielded the most optimal results. After going through each of our personalized interventions and seeing how others reacted as well, some of us further believe that one another’s interventions would not have been nearly as impactful on each other. Miranda, however, believes that improving her incoherent meal schedule could have been better addressed through Mimi’s particular intervention style; for her, she believed that she would have been a bit better at reacting and keeping herself accountable when others would hold her accountable through a public “shaming” viewing (ie. a wall displaying her lack of meals), rather than repetitive “punishment” (ie. having to wash the dishes). Jason also believes that he could have possibly been held slightly more accountable through the Vicky’s intervention style; for him, having to wash the dishes did not necessarily motivate him to eat, and instead served more so as a reminder, which would have also been able to be achieved by being a form of a “task”  in the back of his mind.

All in all, this was quite an interesting, and at many times humorous experience for us. Being able to come together as a house and poke and prod each other 24/7 had its benefits of never being able to “hide” from our interventions, keeping us constantly on our toes, almost like a game. Artifacts like Mimi’s 64 bags of cookies will long live in our memories, and very soon, in Mimi’s stomach.