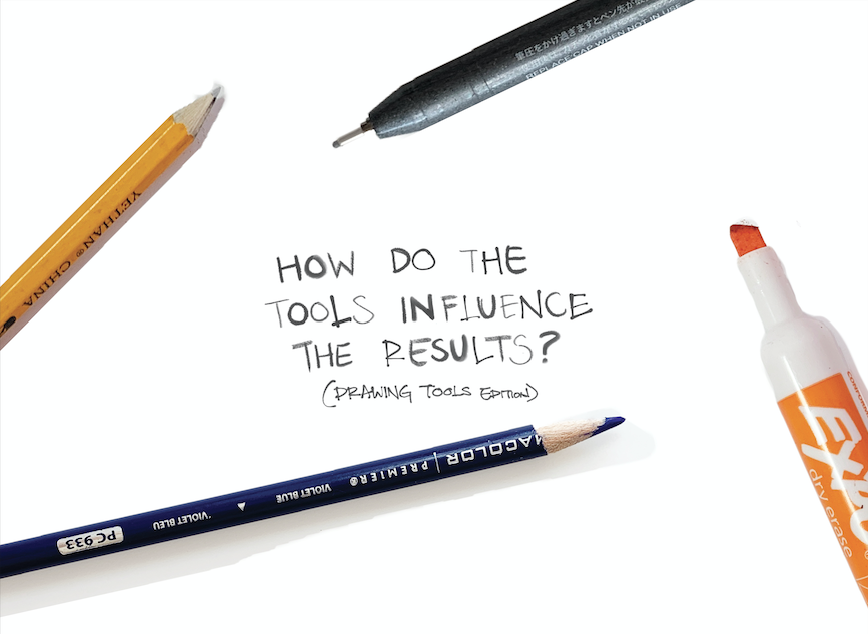 For this project I decided to focus on different tools for 2D concept visualization. Recently, I’ve noticed that when I’m drawing, specifically for 3D products, the quality and effort I put into the sketch really depends on the medium I’m using to sketch with.

In order to fully understand why that is and what persuades me to use the sketching tool in that way, I started my inquiry based on how the tool is advertised, how the form looks, and how it is typically used.

To understand the methods of persuasion, I analyzed the form of the drawing instrument in order to understand different ways of using the tool.

My criteria of analyzing persuasive elements:

Pencil found on table in Porter
When looking at the form of this pencil, the temporality of use is something that comes to mind. For me, I typically use the pencil when the sketch I have to do is low fidelity and small. Because I have to continually sharpen the pencil, I do not consider it to be a good tool to use when sketching. Specifically with this pencil, the shorter length could imply that this is specifically meant to be used for a shorter period of time.

Connotations I have with this kind of pencil are that they are supplied by businesses (restaurants, stores, etc.) that may require some sort of writing instrument. Lack of eraser at the end could imply that the mark that the tool forms does not need to be exact and precise and there can be mistakes.

As a result, the marks that form when I use this pencil are crude, smeared, and not well considered. The sketch I created from this drawing was small and rushed, the lines not completely straight because the tip was dull and there is no eraser on the end. I was able to add shading to the cube using the edge of the pencil, due to the slanted edge at the end of the pencil.

In my daily usage of pencils, I typically only use a pencil when I am looking around studio and all I can find is a pencil. I can always rely on finding a pencil on the floor or lying on a table because the cost and personal responsibility to keep track of a pencil like this is not very high.

Copic Multiliner found in backpack
This type of writing tool has the connotation of not only being a tool for writing, but a tool that is specifically meant for drawing. Looking at the main Copic site as well as other fine line pens of the same type (Micron, Papermate, etc.), it becomes obvious that those who use fine liner pens are creatives. With that background in mind, many times the sketches I create using a fine line pen are seemingly confident and finalized. This can be because it’s impossible to erase and the details you can achieve are more described than other ink dispensing pens like permanent markers or highlighters.

Designers and artists use fine line pens quite often for their final renderings/artworks. This can influence me with my consideration for the finality of the sketch that I create using these pens. I find myself shading and hatching the lines within the cube carefully, keeping in mind to keep my lines straight since each of those lines have a finality to them.

In terms of influencing my daily decision making, the Copic Multiliners are something I use when I have a concrete idea I would like to execute well in a sketchbook or use to begin a rendering, and the material properties of the pen allow it to deliver in a sketch.

Sharpie Permanent Marker found in Locker
Sharpies are used primarily when the object I’m sketching is not on paper. If I do use a sharpie on paper, it’s primarily for visiblity’s sake. Connotations I have with permanent markers are that designers use them when working to further enforce visibility. When I use sharpies therefore, it could be because I am trying to clarify and clearly describe a point. The resulting drawing is crude, because of the tip size and how difficult it is to vary line weights. However, I typically use sharpies to demonstrate a point and when the viewer themselves are a bit further away.

Prismacolor Color Pencil found in Pencil Bag
Typically, when using color pencils, the concept I am trying to illustrate is not fully formulated and finalized. Because it’s not a wet tool, it is mildly erasable and forgiving when a line I’ve sketched is not correct. It is easy to manipulate the opacity and when I sketch using color pencil, I tend to start off with a light hand and go darker as I begin to get more confident. This usage is primarily because of the material qualities of the color pencil.

In terms of value when sketching, I try to get as much usage out of a Prismacolor color pencil as possible, because the tool is quite expensive and the brand itself has the connotation of expert usage. Color pencil is a tool with great variability in line weights and opacity. Because of it’s pointed form and soft wood encompassing the lead, the resulting line is smooth and crisp. This enhances the sketchers drawing experience, thus providing a smoother, well considered sketch .

Knockoff Copic Marker found in Pencil Holder on Studio Desk
Copic Markers tend to have the connotation of being a tool used by professional designers and artists. However, because this is a knock-off marker bought for a fraction of the price of a Copic marker, I tend to view it as less than it is. The resulting sketch and get messy and many times I tend to avoid creating overly complicated sketches since the marker itself does not have the same qualities as a Copic Marker.

The connotations of using a knock-off version of a pen influences the value I put into the sketch, this can be because if I don’t view the item to be something of worth, the resulting sketch may reflect that flippancy.

Expo Marker found in Porter next to Whiteboard
Expo markers have the connotation of trying to quickly understand or explain an aspect of my designs. Because a lot of the time I am trying to figure out the dimensions of a product at a larger scale, Expo markers are my ideal sketching tool because within the context of the design studio, the largest canvases are the whiteboard. Therefore, both the visibility as well as the scale of the sketch greatly informs the quality of the sketch, I tend to try and keep the sketches a bit neater. This is further assisted by the erasability of the dry erase marker.

Because the expo marker is a tool that is predominantly used on the whiteboard, the sketches that result can be a bit messier because of the material qualities of that whiteboard.

Taking a closer look at the Expo marker site, the dry erase marker is primarily used for teaching and demonstrative purposes. This can further perpetuate the idea that expo marker sketches are meant to explain something quickly and to a larger audience. As a designer, I can use this to my advantage when trying to explain a concept or dimension to a viewer.

Highlighter found on the floor of Porter
Typically I only use a highlighter when I cannot find any other tool to make a mark. This is due to the visibility of the resulting sketch. Highlighters have a bright and low opacity finish, which can be difficult when trying to explain the form language of a 3d model sketch. The highlghter also has the connotations of studying and highlighting text within a passage, thus further pushing it down as a tool for sketching. Shading when using a highlighter can create the opposite effect of shadows and as a result the drawing is rudimentary and at an extremely low fidelity.

When looking at highlighter usage, it typically is not used for sketching and is used by everyone, not just professional designers. Therefore, this tool and its resulting sketch is not something I use to visually describe a final concept, rather a rudimentary idea.

To me, when looking at how a tool persuades me, I discovered a huge part of how I use the tool is informed by Peersuading and brand messaging. If other designers and illustrators in the field are using the tool, I’m more inclined in choosing to sketch and invest in the resulting graphic I create. Investing time with a material can be determined by the crudeness/refinement of the line, and the form of the tip as well as the thickness of the tool itself informs the motion of the tool usage. The thickness of the drawing instrument is something else I noticed throughout the process of testing out the pens and markers. The way I hold the tool influences the resulting line and that can be intentional in the design of the pen. That being said, the fidelity of sketches is not only determined by the material qualities of the tool like I initially thought, but I am also persuaded by the brand connotations as well as the form of the tool tip and the way I hold the tool in my hand.