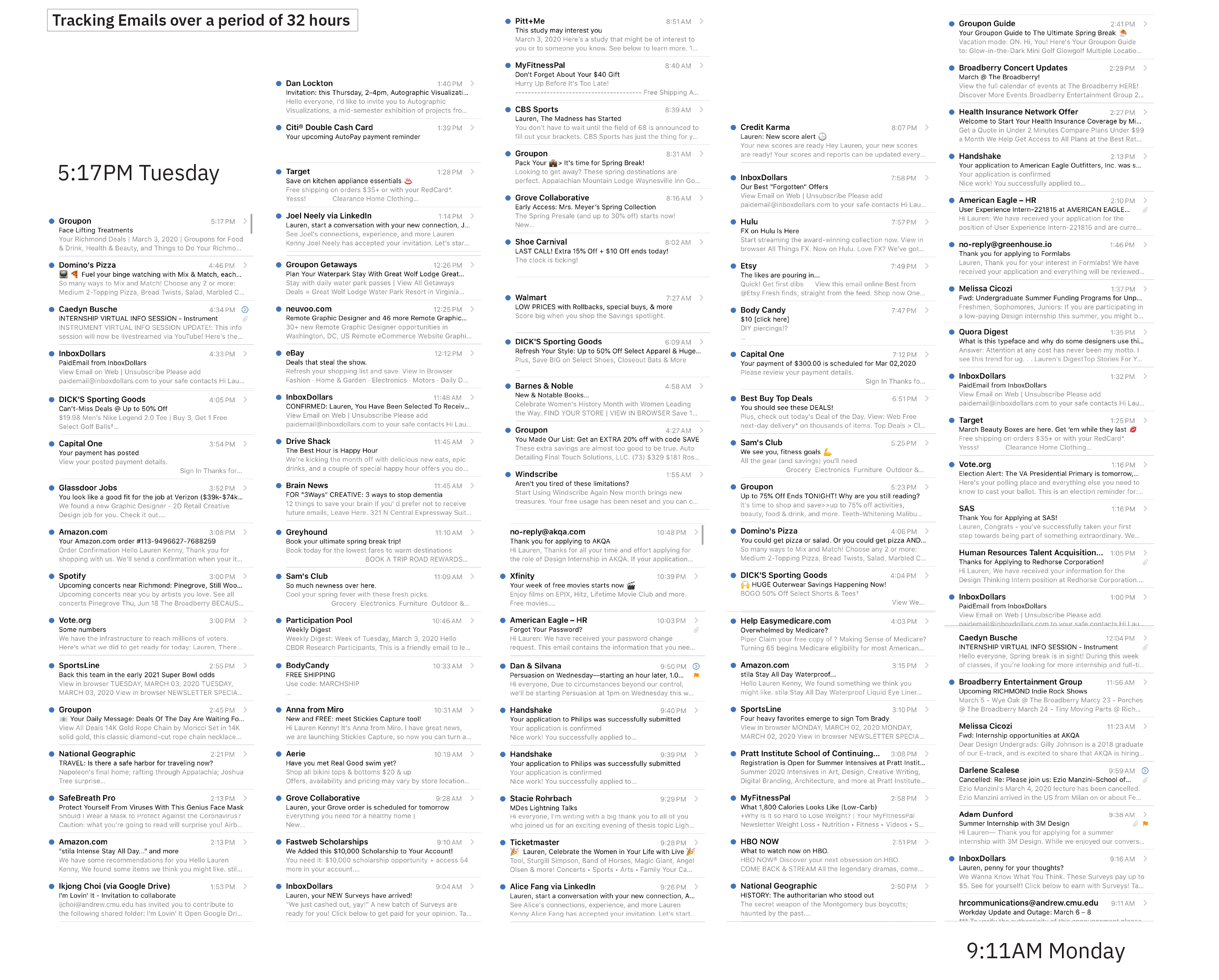 For this project, I decided to analyze my habits associated with sifting through my email. On my phone, I get emails from three accounts: my Carnegie Mellon email, my personal email, and my iCloud email. Email can be a very stressful thing for many people because it can pile up so fast. I personally check my email 3-4 times a day which helps me to stay on top of it. I feel like I have a process that allows me to filter emails quickly, and I was curious to break down this process a little further.

I tracked my email inbox on my phone over the course of 32 hours from 9:11AM on a Monday to 5:17PM on a Tuesday. During this period of time, I received 94 emails. (this is not including pre-filtered out spam)

Emails in relation to time of day

I was curious about what times of day I was receiving the most emails, so I broke these down by the hour. The heavy hitter hours were: 8:00AM, 1:00PM, 2:00PM, and 9:00PM (keep in mind this includes all types of emails and possibly ones sent from other time zones). It was also interesting (and somewhat depressing) to see that emails came out almost every hour. The only real gap was at night. Between these two days, the emails stopped at 10:00PM and started back up at 1:00AM (thanks for the 3 hour rest).

Breaking down types of emails

It’s interesting to think about the fact that 60% of my emails are random subscriptions. I could reduce my inbox by 60 PERCENT if I wasn’t receiving these, so why do I stay subscribed? My initial thought is that I am just too lazy to unsubscribe which could be partly true; however, in the long run I would be saving more time by not having to sift through these emails. My second thought is that I like to receive these deals and updates in case there is a time in the future that I might actually want to use them.

Looking at habits of opening and deleting emails

I broke down these habits into four options: delete without opening, open and then delete, open and then keep, and open and then interact. (I took interact to mean click on a link, reply to the email, or in some way do an action that was a direct result of reading that email.)

Percent of each category opened:

The categories with the lowest opening rates were Random Subscriptions, Job Board Listings (which could hypothetically be included with random subscriptions), Spam, and LinkedIn (which I didn’t open because they were just notification emails). The low percentage for the random subscriptions was surprising to me just because of how big this group is in relation to the total number of emails I receive.

Out of all 94 emails, I only opened 31 of them. This reinforces the point that I might not need to be receiving all of these emails.

Why did I open these emails?

Why do I save emails?

When analyzing why I opened emails, the explanations made sense. Most of the emails I opened had some sort of information that I wanted to read, but why would I save them? The first reason is that I often think that I might want to reference an email later. With some important emails this is the case. It is convenient to have that email stored away for when I might need it in the future; however, for most emails, this is not the case. I rarely ever need an email that I saved, or if I do go back to look at it, the relevance of it has expired. The second reason I save emails is because I am a digital hoarder. I think this plays into the first reason a little bit, but it spans to emails that will definitely never be relevant again. With digital platforms having endless storage that doesn’t interfere with daily life, it is so easy to hoard.

On my phone right now I have 7,930 unopened emails. These emails are probably from years ago before I developed good email habits, but seeing that big of a number for unopened emails makes me wonder: how many emails do I have in my inbox in total?? My personal email server says that I am only using 50% of my total storage (which makes up the majority of my emails on my phone), so technically I don’t have to worry. However, the idea that I have tens of thousands of emails saved on my servers that will probably never get dealt with makes me so stressed. Digital hoarding is so much worse to handle than physical hoarding, and I need help.

I wanted to explore this category a little more because I was curious about patterns I found in these emails and what might persuade me to actually open them. I started by grouping these emails into 8 different categories: retail, research studies/sketchy ways to make money, tv, sports, Groupon, digital products, food, and other. These groupings aren’t super relevant, but it helped me to understand where these emails are coming from. Like I mentioned before, out of all 56 of these, I only opened 5 of them. The category that I was most likely to open was research studies/sketchy ways to make money which is because I’m broke and trying to make money. Besides those emails, the emails that I did open were because there was a deal that might be relevant to me, there was a product that sounded interesting that I had never heard of before, and there was an email with the word typeface in it so of course I opened it.

There were two patterns I found in the subject line of these emails, one positively persuasive and one negatively persuasive. On the negative side, I found that I avoided opening emails that had emojis in the subject line. This is something that I’ve been noticing more and more, and to me it feels ingenuine and wrong to the platform (although I’m sure it does work on many people, I just have a distaste for it). On the positive side, I found that I am more likely to open emails (or at least consider opening emails) that have a discount or sale clearly stated in the subject line. This gets straight to the point and is the only reason I subscribe to these emails.

Reflect:
I’m glad I decided to look at this topic because it gave me actual data to prove that email takes up a lot of mental/digital/time-based space. Realizing my digital hoarding problems makes me want to do a deep clean of my inbox, but unfortunately I know that this is not very feasible seeing as my personal email was created when I was in 5th grade. I am not sure if my “process” of going through my email is the best, but it was good to look at it analytically and systematically. I sometimes worry that I will miss an important email seeing as most times I know what to do with it just by looking at the name (and sometimes important emails are sent from obscurely named sources), but hopefully this never happens. It will be interesting to see what I do from here regarding the emails I am subscribed to. I would like to think that I might unsubscribe from a couple, but knowing me I probably won’t.