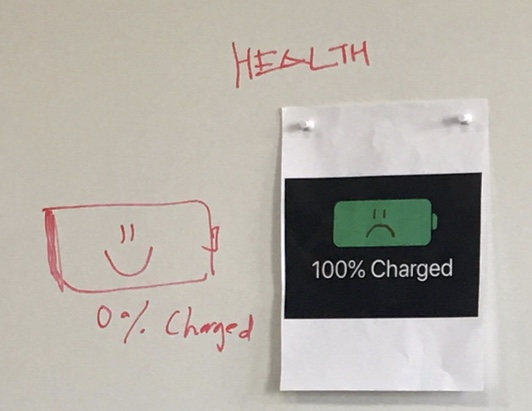 This icon (a frowny face on the battery) is a modern interpretation of what “health” could actually look like through this new simple icon.

Some of the things that we think about when we think about health are the color green and healthy, young joggers running or something. These images we have in our minds often times represent the physical health and the connection to nature, but if we think of it more broadly, health can be thought of it as more metaphorical in a sense that it can also represent mechanical health such as the span of a battery on iPhone or it can also represent mental health and emotional health.

The reason why our group chose to depict the modern-day version of health in this manner is to 1) break the social connotation/stereotype of what health is and 2) to show the connection between mental health and the mechanical health (Battery life of a phone). And, its goal is to help people, especially the younger generation, to be more conscious and aware of how their everyday habits can affect them on different levels, not just through using their phone a lot but perhaps maybe through other habits/practices as well. Who knows.

Rhetorically, this icon effectively uses both ethos and pathos because obviously this is not something logical at least at a first glance so it’s not logos, but as a representation, there is a lot of credibility because the images used in this icon are all familiar to us (100% charged, the battery icon on the iPhone) and also the story being created abstractly through the juxtaposition of different elements really resonate with people on a more emotional level thus it’s also effectively using pathos as its rhetorical elements. As a sign, it has aspects of both icon and symbol. The green, fully charged imagery serves the aspect of icon, physical resemblance to the mechanical system that is charged. The frowned face has the symbolic aspect in which it does not have the factual connection but serves to resonate on the emotional level.

For last week’s class, we brought in photos of fictional heroes, like Baymax, and photos of real-life heroes, like firefighters. During class, we discussed briefly how heroes in our daily lives are sometimes overlooked, taken for granted, or identified only by their job or role, rather than as an individual. In contrast, superheroes that are portrayed in movies are often put on pedestals and idolized for who they are.

For our hero topic, we wanted to bridge the gap between these two categories of heroes. In order to do this, we chose to challenge some of the discussion around real-life heroes by portraying them in typical superhero poses, similar to the ones characters like Baymax are often shown doing. By combining these two images, we could emphasize the life-saving actions of individuals like firefighters or doctors, ultimately recognizing and acknowledging the risks and sacrifices they take to help others.

In regards to signs, the image we created could be classified as an icon, as it is fairly literal, and a physical representation of the signified – a firefighter superhero. Rhetorically, this image appeals to pathos the most, as the superhero pose itself brings to mind strength and the emotions of awe, triumph, and pride. When paired with the image of a firefighter, these emotions help to emphasize our message, as our icon connects them to a real-life hero.

When comparing the objects/imagery that members in my group brought in to represent Mexico/Mexicans, we realized that many of these things were rather stereotypical symbols of Mexican culture such as sombraros, the Mexico soccer team, and other branded products. While one piece in isolation felt okay, looking at the entire pool of images felt stereotypical and borderline offensive. We decided to challenge these original interpretations by representing Mexico through a universally known medium: TikTok (a video sharing social media platform). We felt that such imagery could use pathos in conveying a positive/fun feeling that could be shared by anyone in the world. At the same time, certain songs or background elements could illuminate a more modern and representative Mexican culture.