Like any normal college student, I spend a lot of time trying to figure out what to eat every day. While in high school I had fairly solid eating habits, most of which revolved around what the school was serving for lunch and whatever my mom was making for dinner that night. Freshman year of college I still didn’t have to worry, as I had large amounts of Dinex and blocks which generally meant that I ate on campus. Moving to now, the lack of Dinex, a broken fridge and time has often pushed me towards eating out or ordering food. This semester I started using services like post mates more frequently in order to get food delivered to where I live.

Although I’ve had Postmates on my phone for a while, once I started using it more actively, I became more in tune with how the app worked, and how the app tried to get me to spend money and buy food.

The most common way is by offering free delivery in the “party” tab. When I think about ordering food vs going to a restaurant, I often think of the cost of delivery as the main factor against this. Items in the party tab have free delivery, thus incentivizing me into buying, as “it’s the same price as going to a restaurant.” This of course is a blatant lie as service fees are still built in, but it does an effective job at convincing me otherwise. 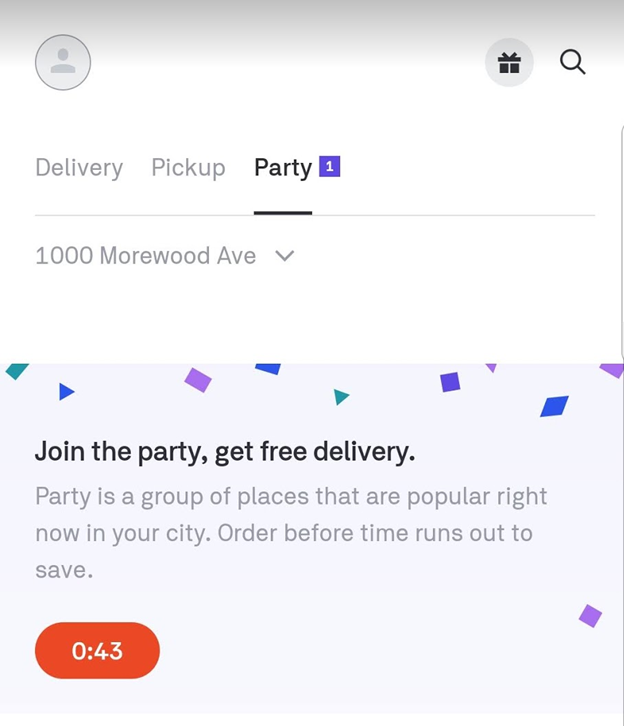 Additionally, the party tab has a timer. If you don’t like the restaurants listed, then you can wait for the timer to expire and new restaurants may appear. I’ve noticed myself opening and checking the app over and over to see if the timer has expired yet. I’ll often also check back to see if there’s any restaurants that I want to order from. This in turn increases the overall time I spend on the app, thus potentially increasing the likelihood of me buying through it.

As you go down the page, there’s a tab that appears occasionally. It brings up past orders, and if clicked on will pull up a page that has preloaded previous orders into the cart. This removes choice from the user, streamlining the process of ordering. Although I’ve never used that method, I can see how simplifying the experience by directly offering up food they know the customer wants would get people to buy more. If you go to the side menu, it shows past orders there as well. This doesn’t do an effective job at persuading me, as often times when I order, I specifically don’t order the same food over and over.

Since I’ve started using the app more regularly, I’ve noticed an increase in popups and emails offering special timed deals and discounts. The quick expiration of deals serves to make me feel like I’m a rush and if I don’t buy now, I’ll miss out on “5 dollars off any meal.” I’ve found these to be particularly effective, as It almost feels like throwing money away when I’m not utilizing these. Like any form of discount, the overall goal is to maximize overall expenditure on my end, and they are willing to sacrifice a few dollars per meal in order to get me to spend more time and buy more overall. After monitoring my habits on the app, it was interesting to see how often I caught myself falling into the same trap of discounts and promises of free shipping and I think now that I’ve noticed I’ve started using it less and less. Even still, the methods that Postmates utilizes are extremely effective.