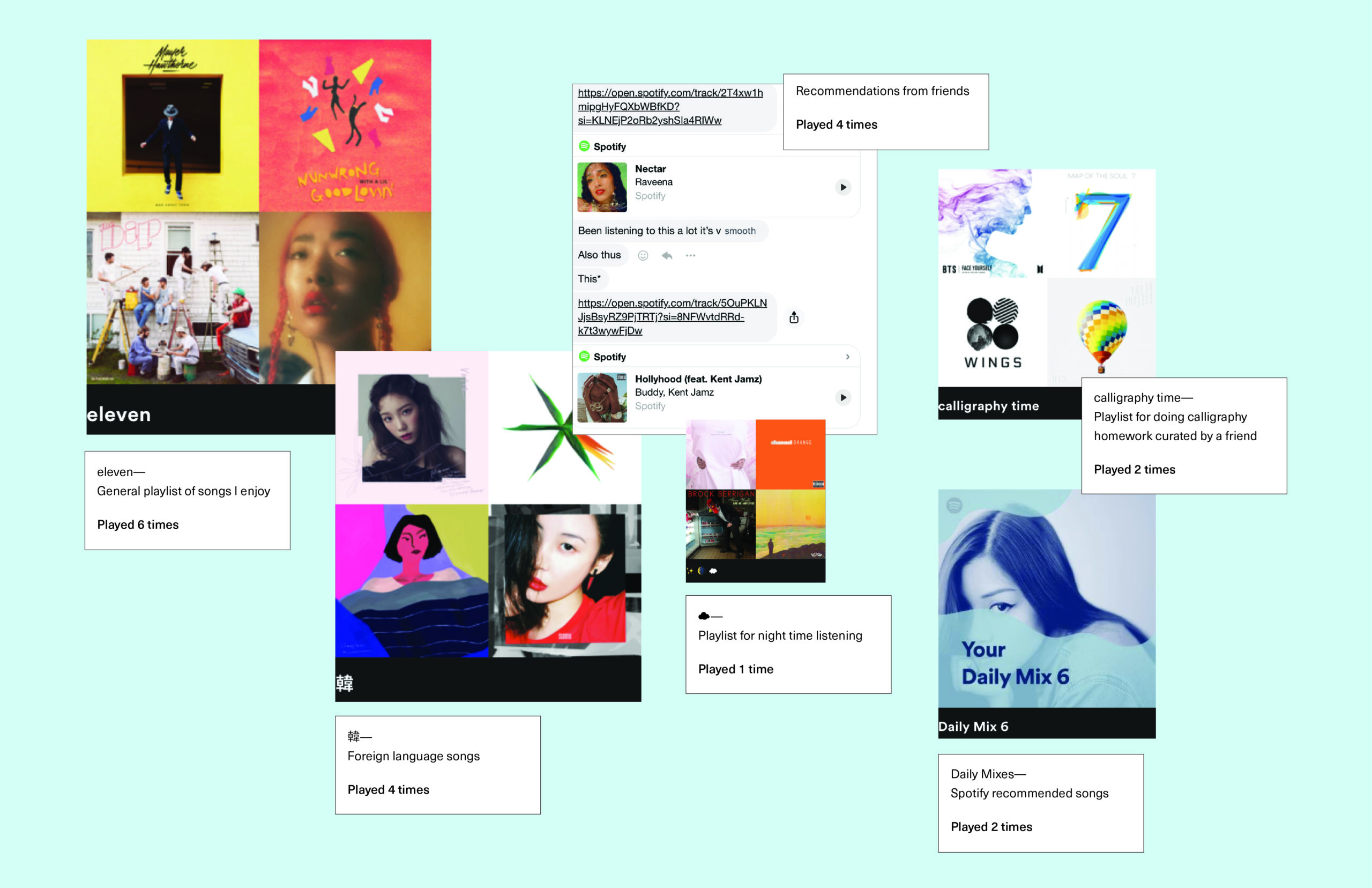 Listening to music has long been part of my daily routine. Whether I’m listening to my existing library of music or discovering new songs, music facilitates my day to day actions and tasks, impacts my mood and is a central theme in my conversations with others. For this project, I was interested in exploring the factors that persuade and influence my song choices throughout the day.

Existing Music Collections
Majority of the music I listened to were from my existing curated playlists. Two primary factors dictated which playlists I listen to throughout the day: digital real estate of my Spotify feed and the context of my activities.

Within the Spotify app, the landing screen displays two categories of content: ‘Recently Played’ and ‘Your Heavy Rotation’. The presence of these carousels two at the top of my feed and the stylistically larger cards for ‘Your Heavy Rotation’ provides an easy entry point to jump back into my day to day music listening choices. The area these playlists occupy within the scope of Spotify’s digital real estate simplifies the decision making process of determining what to listen to for me, especially if I am not looking for new music or a particular song.

Further, I found that the playlists I select are heavily influenced by my context, namely, the task I am trying to execute and time of the day. For example, I exclusively listen to my workout playlist when I am exercising. I the songs in this playlist have utilitarian purposes—  I was persuaded to add music that had more beats per minute, and incorporated certain rhetorical techniques. As this playlist primarily features rap songs, the impression I get from the intense tones and more aggressive voices is able to influence my own emotions, and make me more determined to power through my workout routine. Another example of context driven music choices is my habit of listening to foreign language playlists when I am doing work. While I don’t particularly enjoy listening to classical music, I get too distracted when I listen to English songs, as my attention is diverted away from my work when I want to sing along. Thus, I am persuaded to listen to songs in a language I don’t understand, to strike a balance between enjoying the music I am listening to and being able to focus.

Discovering New Music
Aside from listening to my existing music collection, I also enjoy discovering new music through suggestions from friends or Spotify recommendations.

Most of the songs recommended to me by friends were sent to me over text message. Making note of the songs I decided to click into, I observed I was primarily persuaded through the rhetoric my friends used to introduce the songs to me. I had a higher chance of listening to songs if I was provided with contextual information of what to anticipate, for example, a ‘smooth’ song or a song that is “just so calm and shows the thoughtfulness and personality of the [artist].” Comments such as a song is “just too good,” or I have “been listening to this a lot,” provided assurance that a song was worth listening to, especially when recommended by friends who have similar music taste as I.

When songs were linked with no introduction, I was persuaded to select songs based on their album covers. Metaphorical symbols such as a hot air balloon allowed me to deduce through semiotics that a song might embody lighter themes such as freedom and change, a theme I resonate more with. In contrast, another album cover featuring dark grunge textures and an emblem that resembles a bomb vest conveyed emotions that seemed too intense, so I decided not to listen to the song.

In the event that a friend curated a playlist for me, I was persuaded to listen to all the featured songs. The effort my friend went through to put together a playlist for me was a convincing reason for me to listen, as I felt like I should respect the effort and thought that went into curating the collection. Further, the recommendations had a certain ambience that aligned with my task at hand: my calligraphy homework. The featured songs were in a foreign language and were calmer, allowing me to focus and maintain stability in my hand as worked on craft control.

Finally, I was also able to discover new music through Spotify Daily Mixes. Rhetorical choices that Spotify employs through their captions such as “Brand new music from artists you love,” and “Get better recommendations the more you listen,” implies credibility. Through the use of emotion, the system convinces me that it understands my music listening patterns, and can recommend me music I will resonate with by showing me both songs and artists I know and new songs and artists I might like. In this way, the process of exploring a pool of unfamiliar music is less intimidating, since there are some familiar touch points scattered throughout the playlist.