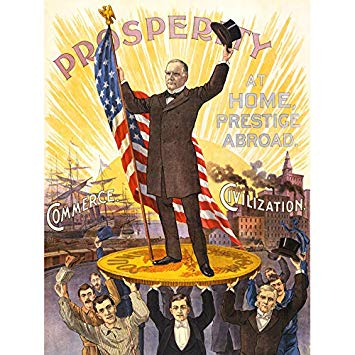 The American Dream is the idea that each person has the ability and freedom to pursue their aspirations on the basis of hard work. Our chosen image illustrates a group of men lifting McKinley on a gold coin, representing “sound money,” to promote the idea of prosperity under his presidency. Relatively, the concept of the American Dream was rampant in the 19th century, beckoning foreigners to immigrate and better their economic statuses (especially with the Gold Rush).

Our group challenged the propagandistic idea that the highlighted notions of prosperity and commerce came with or subsequently to freedom. We contrarily proposed that freedom is a luxurious byproduct of said economic opportunities. A modern example is Operation Varsity Blues, a scandal that ousted at least 750 students benefiting from bribes that “influence[d] undergraduate admissions decisions at several top American universities.” Research indicates that those with existing familial wealth are more likely to attend university and better-ranked ones at that. Quartz Senior Data Reporter Dan Kopf writes, “Children of the wealthy benefit greatly from their parents’ ability to pay for tutors to improve grades, classes to raise standardized test scores, and in exceptional cases (paywall) to give large donations to schools that all but guarantee admission.”

If we were to reimagine the poster in the reversed context proposed above, we would emphasize the freedom of McKinley atop the coin, representing the privileged, and the disadvantages that those that are beneath and carrying him might face. Additionally, an effective poster would utilize modern-day elements to garner deeper sympathy from its viewers. Examples of such elements include: airplanes rather than boats (international agility), robots and automated factories (economic shift).