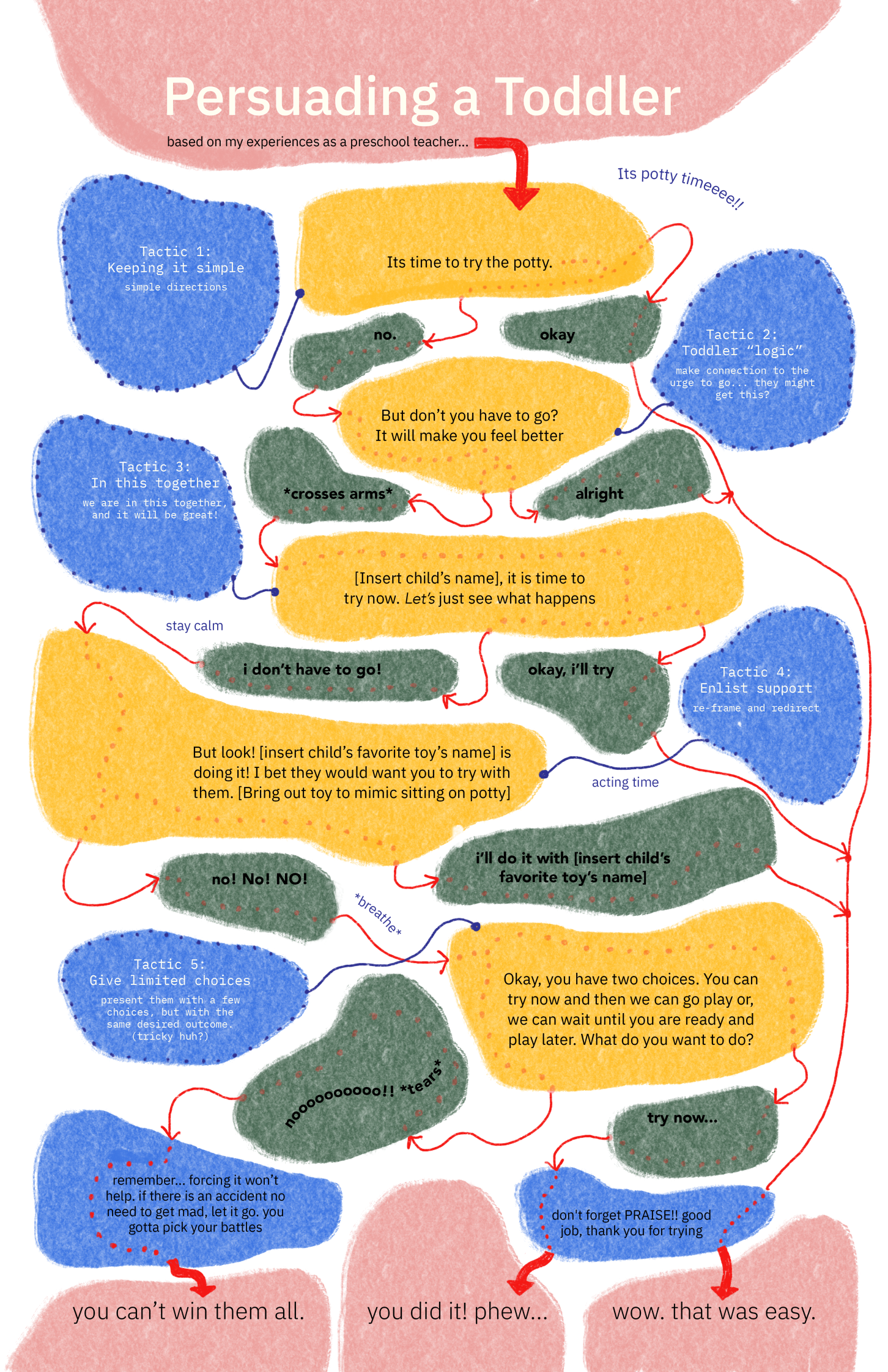 An analysis of persuasive language I use everyday working in a preschool and visualizing my thought process through common conversations.

*note: I am not an expert in any way. These are just based on my experiences in a classroom

For this project I am analyzing the language that I use, as a preschool teacher. When brainstorming for this project I thought it would be really interesting to look at the language that I use, rather than examining persuasive language around me. I don’t think that I use any interesting persuasive tactics normally, except at my job as a preschool teacher. I thought this would be an unique lense because the language I use is literally trying to convince a very specific audience to do something. The children I teach are 2-4. Therefore the way I approach a problem and the language I use is very different from what I would with a peer or even an older child. They require much more patience, understanding and even some “tricks” to help the child reframe the situation. Through my experience working with children I have figured out how to talk to them while getting certain tasks completed.

Everyday I find myself trying to persuade toddlers to do the same things; (including but not limited too) using the bathroom, picking up toys, listening and sitting still. At this age they are at the prime stage to disagree, often just for the sake of disagreeing. It is good that they are testing the limits and becoming independent, but sometimes things have to get done, especially in a classroom environment.

Starting off the project I chose two of the common scenarios in my day and analyzed them further. I decided to look deeper into: using the bathroom and picking up toys. I used a bottom-up approach starting with the language and later analyzing it. For each scenario I went through an imaginary conversation thinking about the common responses I get and more importantly how I would reply. To take it a step further, for each of my responses I categorized them into “tactics”. These are more general techniques to use when speaking to young children. While doing this I was forced to really analyze what I say, and think about how it fits into a more general tool that could be applied to many different situations. For the two scenarios I explored there were overlaps in the “tactics” I used. In theory, all of the tactics could of been the same. I could’ve done a top-down approach, think of the “tactics” and then form a response using them. However, doing the bottom-up approach resulted in it being a reflection on my language, rather than just presenting potential responses.

In order to organize my thoughts I sketched out the conversation as a flow diagram. It reminded me of the decision trees/quizzes I used to do in magazines where you would start with a question and follow the path to get to the answer. I decided to use this format to visualize the conversations. I tried to keep the final infographic quite playful and included bits of humor (which goes along way when working with kids). Alongside the potential conversation examples I included the “tactics” I had previously identified. This shows the deeper analysis and acts as potential suggestions or helpful hints I have gathered from my experiences. Overall, the infographic is really a representation of my thought process when presented with these situations.

I really enjoyed doing this project. It forced me to inspect a part of my life that I don’t think too deeply about on a day to day basis. Being able to talk to little kids in a successful and nurturing way is a skill on its own, but until this activity class I hadn’t really thought of it as persuasion. It is really interesting to see how different persuasion is used in different contexts. I think I would like to continue to make more of these. It could become a fun series.